Does exactly what it says on the tin. Some of the nonsense contained herein may be very loosely related to The Sisters of Mercy, but I wouldn't bet your PayPal account on it. In keeping with the internet's general theme nothing written here should be taken as Gospel: over three quarters of it is utter gibberish, and most of the forum's denizens haven't spoken to another human being face-to-face for decades. Don't worry your pretty little heads about it. Above all else, remember this: You don't have to stay forever. I will understand.
Post Reply
17 posts • Page 1 of 1

All to play for - some teams are still battling relegation, but more importantly, IGM are only 16 points ahead before KO and could lose this on the last GW! Typical...
Games are being played simultaneously at 4pm on Sunday so it's either channel hopping or Jeff Stelling. Champions/Europa and Premiership places all at stake.

Arsenal v Watford Watford could cling on by the smallest of margins today, but Villa might have to help them out. No manager, and a drubbing earlier in the week, won't help.
UK - Sky Sports
Burnley v Brighton Burnley comfortable in the top half, Brighton just past the squeaky bum line. Both free to play without too much pressure.
UK - Sky Sports
Chelsea v Wolves Chelsea the ones fighting for places here, and having to put their mid week loss behind them. Can they? Wolves capable of stopping them.
UK - Sky Sports
Crystal Palace v Spurs Spurs possibly could go 6th. Palace have a terrible post Restart record, but aren't going down. Breathe.
UK - Sky Sports
Everton v Bournemouth Bournemouth will have to pull off something miraculous and hope that other teams let themselves get thrashed.
UK - Sky Sports
Leicester v Man Utd Potential for mutual party spoiling, even without other results.
UK - Sky Sports
Man City v Norwich I'm not looking
UK - Sky Pick
Newcastle v Liverpool Well, there have been some bloody good games in the past...
UK - BT Sport
Southampton v Sheffield Utd Both safe, with the Blades exceeding all expectations. Maybe some nice football?
UK - Sky Sports
West Ham v Aston Villa This will be where Spam slip up

Villa holding on by the elastic in Grealish's socks.
UK - BT Sport

For the last time then, gird your loins, see to your teams, play any unused chips and walk out onto the pitch with your heads held high. ATTACK! (Not you, BB&S or EIB, you stay in the dressing room and have a rest.)
I'm expecting you all taking a knee, too, but you've been doing that all along, right?

Good luck to you and your RL teams. Full buffet available after the game, speeches optional.

Looks like Mike Dean is going to lose his crown this season. Taylor has him beaten hands down 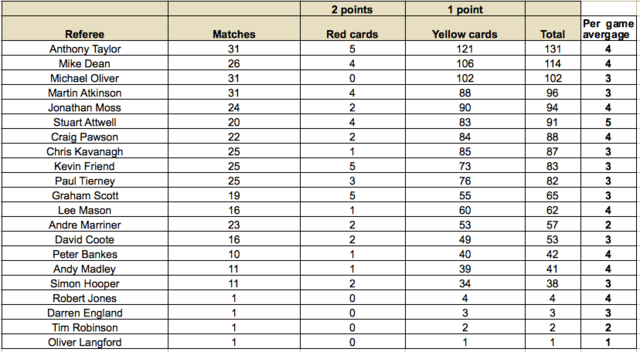 one game to go... and he could still win on average
I just can't keep living on dreams no more
Top

He's going to have to go some, but Arsenal & Watford are big hitters in the yellow card league
Arsenal even lead the red card league too
Cheers.
Steve
Just like the old days
TheCureCommunity

A lot of nail biting both ends of the table this afternoon
Cheers.
Steve
Just like the old days
TheCureCommunity

Pretty sure a few teams will be crying right now after seeing this
BENCHED:
Mahrez,
Mane,
Salah,
Alexander-Arnold
Cheers.
Steve
Just like the old days
TheCureCommunity

I've ended the season with a return of 47 for this week.

I'm not very happy about that.

Nice last-game present from the gods of FPL - Aubameyang drafted in and captained. Dude!

Did we win then Boss?

Well, here we are. The season is over - one blighted by covid-19 and VAR in equal measures. There hasn't been one like it before and we all sincerely hope that there wont' be again. We have had a spectacular ride round the rollercoaster, and quite a few of us have had queasy moments. Now that the Cup has been decided, we can safely say it definitely is all over - in August.
GW38+ had a few turns, with things happening all over the place as the games were played all at once. Bournemouth winning couldn't keep them up, and now Eddie Howe and Ake have gone. Hawkeye's failure in the first week of comeback has its part to play in that. Norwich got thumped but then, they're not alone amongst City opponents - Hernandez' great goal got disallowed for offside, which was a shame, as it was early enough to have made a difference to the game. Although De Bruyne got 2 and an assist, it still wasn't his show! Arsenal (Aubameyang) beat Watford 3-2 to send them down, but not without a fighting performance from the relegated team, Welbeck doing himself no damage. Brighton ran out out the winners too, as last day nerves had been eased beforehand. It didn't go to plan for Wolves' Europe spot as Mount got the better of them for Chelsea - Wolves then needed Chelsea to beat Arsenal in the FA Cup Final for a spot. At Palace, Kane did his thing but Schlupp equalised - no matter as it gave Spurs their European slot. Naturally a win would have been better, but our Steve didn't have to say 'Dammit, Palace!' on the last day. Leicester were disappointed as Utd ran over them. Fernandes scored, as did Lingard - no one saw that coming!
Over to the Reds and Champions - Gayle did score, but Virgil, Divock and Sadio put the Toon in their place - not a rerun of former classic games but not TOO bad

Newcastle are still in the grip of a takeover nightmare, the Saudi one being ruled out, but hopefully the new offer being talked about will be a good one. Liverpool now have the trophy safe. Over in Southampton, that Ings popped up again to help sink the Blades, who have done themselves proud this season.

And lastly, Spam had one job - to send Villa down - and failed. Hmm.

I can announce that the very BIG SHOUT OUT this week goes to Damage Dunfermline with a stonking 114 points, which IIRC is a record? If not, it should be! And also a special mention for Faith Rovers with 102 as well as many scorers in the 90's. Well done all!

The Head 2 Head, suspended because of lockdown and the unbelievably complicated convolutions needed to get it right again, goes to Damage Dunfermline as the last CROWN wearer

And now, the moment you have all been waiting for.. it's been very tight at the top lately but some one had to win!

Stop right there, IGM, it wasn't us. We've done a last season Liverpool - nay, even a Utd from a few years back. Right on the button we went and lost it, by 52 points.

Blood Brothers & Sisters snatched it from under our noses by being a bit more together than we were. Ah well. Next season, right? Congratulations to The Mish lot

and EIB have certainly not been slackers by any means. One of Graham's teams has won a trophy for the second time in a few weeks 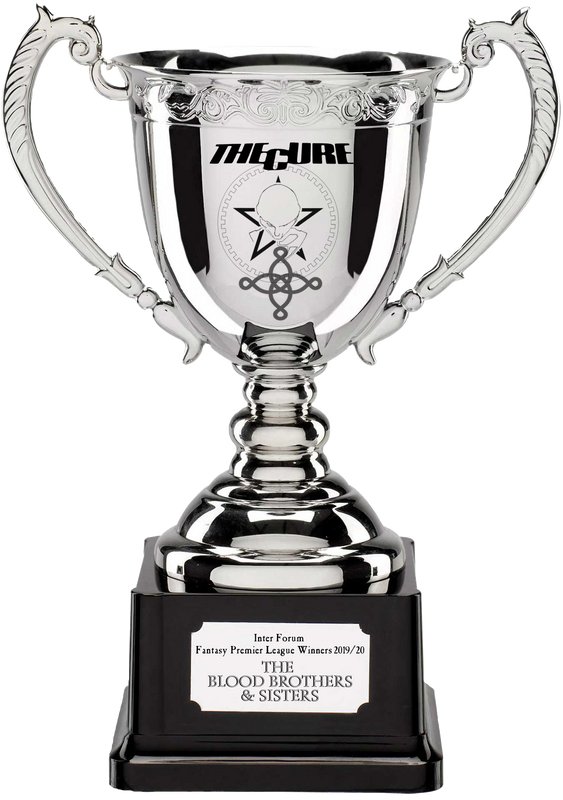 Thank you all so much for playing through thick, thin and lockdown. Until next time then - 20/21 season KOs on 12th September with the additions of Leeds (!), West Brom, and either Fulham or Brentford. Come on you Nylons! The three of us hope you'll carry on playing - there's a new rule saying that you have to find another fan to replace you if you leave...

Details will be up when we get them.

Slight soppy stuff here - many, many thanks to both Steve and Graham for all of the number crunching and scratching heads they do to make sure all of the tables are correct. It's not all done by the FPL website, ya know. I'm just the frontwoman (though I'm better at it than Kellyanne Conway or that ditz they've got now).

to you both!
I just can't keep living on dreams no more
Top

No
I just can't keep living on dreams no more
Top

Well done the Blood Brothers & Sisters.
All the way to the wire with a great strategy for the last few games

& great job to everyone who played this season. Time for a well earned break

Ah well if we did a Liverpool-last-season then roll on next season. Sounds more like we did a Spurs though

congrats to the winners and mighty thanks to Steve & Graham for the number-jiggling and cheers Boss. Enjoy the break folks, looking forward to sitting on our virtual buckets next season.
Top

@Planet Dave your attention is required. And the rest of you!

Much detailed study to be done before team is finalised.

Or just random guesswork with 5 minutes to deadline.

You decide...
...train, crashin' head long into the heartland...