The Sisters of Mercy Forum
https://myheartland.co.uk/

by DJElectricDaddy
Buttons = YES or NO?

Collars = YES or NO?

Sponsors = YES or NO?

Evertons revolting grellow (green/yellow) away kit = YES or NO?

A bad kit can put a hex on a teams season before they’ve kicked a ball.

by Swinnow
Buttons - pointless (see what I did there) frippery

Collars - no thanks, as a kid the floppy collar was the major point of distinction between my team's home shirt and that of our most disliked rivals. To this day any Liverpool home shirt with a floppy collar is instantly dismissed as being 'too Yernited'.

Sponsors - necessary evil, but all the betting firms we see now are plain wrong and the ever increasing number of them on a shirt is starting to make the game resemble bloody rugby league in all its laughable amateurism.

Everton yellow - if you know your history I am sure they still owe the rent and so cannot be considered a serious topic for discussion.

Alt third kits - yes please. Though our current black/grey/pink chequered affair is a rare example of an awful black kit.

Bad kit hex - not really though I have often been irked by liking Everton's kit when it is smarter than ours for a given season.

Worst kit - anything with that devil on the club badge.

by Pista
Buttons = Deffo not. Just think of all the drag

Sponsors = Would prefer to see charities on the shirts TBH & I'm with Chris on the betting company stuff. With the advertising hoardings, the half time ads etc. it's too much now.

Evertons revolting grellow (green/yellow) away kit = At least it doesn't look like it's got a chunk of shower curtain stuck on the front. Or like a bar of cheap soap.

Local identity. Yep for sure. Remember when Cardiff were made to wear red? Not a popular move at all.

A bad kit can put a hex on a teams season before they’ve kicked a ball? Anyone remember this?

What d’y’all think? Fave kit? Worst kit? Biased I know but the 80's Palace kit with the sash was lovely.
Worst? Mmm. It's a toss up between this delightfully subtle CD Palencia thing and AFC Bedale's sausage obsession. But there has been some stiff competition

by ROBBIE
[/quote]But there has been some stiff competition
[/quote]

by Swinnow
By Everton away kit, did you mean their current third shirt.... Which is nondescript, a bit like the debt ridden club and it's wooden shack of a ground

Or did you mean this beast.... 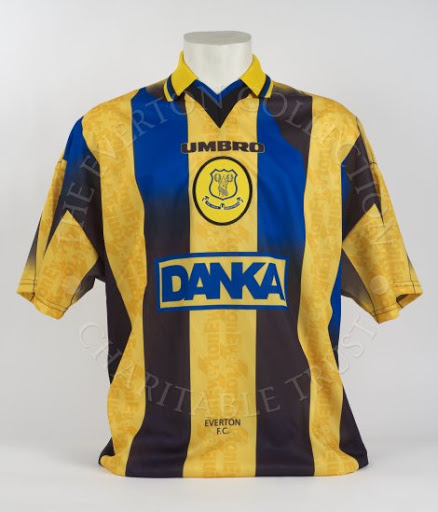 Which is a full on abomination from their many years in the shadow of greatness.

by EvilBastard
Perhaps more shirts like this is the solution...

by DJElectricDaddy
Must say, despite the dreadful team, West Brom have the best Jersey this season. Really love the thick/thin stripe motif. Too bad we won’t be seeing it very much, or for much longer.

On the other hand the Arsenal third kit wth the weird zebra stripes.....what the living hell were they thinking. Hot tub 80s time machine?
All times are UTC+01:00
Page 1 of 1