The Sisters On This Day

THE place for your Sisters-related comments, questions and snippets of Sisters information. For those who do not know, The Sisters of Mercy are a rock'n'roll band. And a pop band. And an industrial groove machine. Or so they say. They make records. Lots of records, apparently. But not in your galaxy. They play concerts. Lots of concerts, actually. But you still cannot see them. So what's it all about, Alfie? This is one of the few tightly-moderated forums on Heartland, so please keep on-topic. All off-topic posts will either be moved or deleted. Chairman Bux is the editor and the editor's decision is final. Danke.
Post Reply
488 posts

Also on this day, the Alice EP/12" was released.

March 28th, and the gigs (or not) of today have been so far:

A lot of people got ripped off as I recall.
advanced, forthright, signifficant
Top

A lot of people got ripped off as I recall.

Oh yes, some info about these events can be found @SistersTours and also under the links mentioned there ...


29 March saw The Sisters play in

A lot of people got ripped off as I recall.

Oh yes, some info about these events can be found @SistersTours and also under the links mentioned there ...


29 March saw The Sisters play in


Another good review (this time from the NY Times), I like the final line, makes a change from the usual summary:

Smoke began pouring onto the stage of the Ritz half an hour before the Sisters of Mercy appeared on Saturday night. A good haze is essential to bands like the Sisters of Mercy. Fans call them gothic, a category that requires gloomy, cryptic lyrics, an aura of mystery and a pounding dance beat; the music draws audiences that wear black clothes and heavy makeup, signifying sensitivity, angst and an acute fashion sense.

By the time the Sisters of Mercy turned on their drum machine and started to play, the members' faces were obscured while the smoke caught dozens of spotlight beams in geometric splendor. Only Andrew Eldritch, the Sisters' singer and songwriter, was fully lighted during the set, between bouts of flickering strobe lights and dramatic silhouetting; then again, he kept his sunglasses on. But fans were thrilled to see him at all, since it was the English band's first tour since 1985. For the occasion, he wore white and stalked the stage as if he'd been studying Jim Morrison's poses in "The Doors."

The band's various lineups have been united by its drum machine and by Mr. Eldritch's bass-baritone vocals. In his lowest register, he is a stoic voice of doom; at emotional moments, his voice rises with a pained vibrato or on occasion a joyless yodel. His lyrics move between romantic suffering and images of apocalypse and anomie, seeing the world as "four billion empty faces." His writing has made some progress in the Sisters' 11-year-old career; while the sentiments haven't changed much, recent songs are less likely to string together cliches like those in "Marian": "in the sea of faces, in the sea of doubt, in this cruel place, your voice above the maelstrom."

In the title song of the Sisters' new album, "Vision Thing" (Elektra), Mr. Eldritch cynically spits out the phrases of George Bush; introducing the song at the Ritz, he snarled, "I used to think, once upon a time, that you didn't all vote for him. Now I think I was wrong."

The Sisters of Mercy have toyed with keyboards and choirs, but the current band is lean and guitar-centered, with its riffs punctuated by guitar solos or feedback; Suzanne Josefowicz's keyboards are less prominent than her descant backing vocals, an octave or two above Mr. Eldritch. The stripped-down arrangements emphasize both the bleak tone and the momentum of the songs, but at the risk of sounding repetitious. For those who don't already think Mr. Eldritch is a deep moral philosopher, the Sisters of Mercy work best as an ominous dance band.

Warsaw and KrakÃ³w 2009 - two of the worst gigs i've ever been to. Absolutelty dreadful, waste of time and money.

Pinch punch, 1st of the month &

Bartek wrote:Warsaw and KrakÃ³w 2009 - two of the worst gigs i've ever been to. Absolutelty dreadful, waste of time and money.

KrakÃ³w was particurally bad, no interaction whatsoever, even as for TSOM standard, no sound, crowd was twice louder than band.

Ouch. Have you been back for more since?

April 1st has had a lot of shows:

Praha - Czechs (one, two three) write name of their capital city this way; while, obviously, Prague it's English manner to solve this issue.

Praha/Prague ... I should know, I've been there. But I was a much younger man then, and spent the majority of the trip drinking through the night. Would like to go back in a more serene state.

I'm doing Utrecht on this tour, not so much a last chance, but a return to my pre-parenthood life, when we used to use Sisters gigs as an excuse to travel. Last time at the Roundhouse was the first time I felt that Sisters gigs were starting to blur into one memory, so time to bring something new to the mix again (can't see Andrew doing it for me)
Top

On the 2nd April

April 5th brought us these

... and three events have so far taken place on an April 6th

2003 - a concert during the Smoke And Mirrors Tour @Columbia Halle, Berlin, Germany
Top 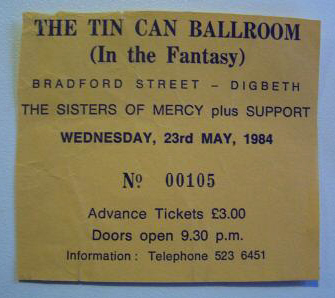 Let's have a look at what happened on the 8th April then...