euphoria wrote: It's +12 hours from where we are Lachert

Oh and yeah, have fun!

currently +13 for me, moved to stockport, cheshire half year ago. living in hat museum now, 5 minute walk from strawberry studios

You're in Stockport? Bloody hell! That's only up the road from me! I'm in central Manchester

yeah, only 45 minutes in stagecoach 192 on a6 and i'm on piccadilly ready for party

any more heartlanders from manchester? saw few blokes in sisters t-shirts but nobody i know.
long live rock'n'roll
Top

Lucretia (first half)
Top Nite Out (?)
Temple of Love (second half)

Von: "We've been here for a week and we've loved it."
"We're Hawkwind and this is a song about love."
Top

One of Von's mates called Craig was the support act, half an hour of singer-songwriter-acoustic guitar stuff. Possibly Von's sense of humour?

Von was inaudible for the first couple of songs but the sound was great after that. It seemed that either Von was singing the new songs louder or they were turning him up for it, on the assumption that everyone was singing along anyway on the old ones.

Doktor Avalanche is now powered by 3 Macbooks with the letters D, O and K on their lids. Good to see Si rocking out.

Von has a beard now (as in 2005) so I think it was him I saw walking near the venue yesterday. Every goth in Auckland came out of the woodwork. One of them grabbed me for a snog during "Dominion/MR", which I will have to explain to the missus.

Good to meet Randall Flagg, and to see every freakin' goth I used to hang out with in Wellington come up for the gig.

It was everything I envisaged and expected a TSOM gig to be, although personally disappointed not to hear "Giving Ground" or "Romeo Down". Well worth the money. Fantastic.
"We're Hawkwind and this is a song about love."
Top

It was all pretty quiet, but everything just built up and up. It just kept getting more and more rock n roll. For me personally, This Corrosion and Dominion/Mother Russia were hi-lights. I even enjoyed a rousing version of Vision Thing before 2nd? 3rd? encore closer Temple of Love.

It was worth the 20yr wait. When they come back (

) Ill do it all over again. TSOM changed my life back then, and they re-affirmed that tonight.

At the end, Von said theyd been in country for a week, and had a great time, in a very sincere way.

TSOM, thanks, it been real.

Thanks for the setlist and review

Hah, love to hear all went well. I can imagine a lovely variety of Anaconda ...

Thanks for setlist and everything... 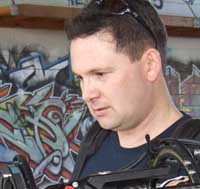 And the big surprise of the night.... Von has retired the yellow shirt!!!! Black combat fatigues for the night.
Top

you're not familiar with youtube in your hobbit-holes out there, right?

Plenty of people were filming but I can't afford a phone of that quality.

The place was near-to sold out, impressive given the competition of System of a Down and Roger Waters doing The Wall. I yelled for "Comfortably Numb", but to no avail.
"We're Hawkwind and this is a song about love."
Top

H. Blackrose wrote: Von has a beard now (as in 2005) so I think it was him I saw walking near the venue yesterday.

A soon as he came on stage I thought <damn> yes it would've been. Good Von spot!
Top

Standing mid-room straight-on to the vocal microphone I thought the sound started OK and got a lot better as the gig went on. Von was virtually inaudible - not much more than a mumble - for 'Ribbons' and 'Dr Jeep', but by a few songs in it seemed to improve. Certainly by the second half he was very clear and seemed really into it - pouring meaning into every sentence. I had honestly thought that he might just be going through the motions a bit, but that wasn't the case at all. Like the goatee, very cool. He looks a VERY young 52-yr old.

I strolled down to the front right, in front of Chris for 'Summer' to 'Flood 2', a couple of people back. Sound still excellent in front of the stage. Atmosphere quite subdued down there - a few punters just limply stood there, but a small moshpit started rocking for 'Alice/Anaconda/More'. Von commented how hot it was - like a bloody oven in there, and Chris was looking quite a bit worse for wear. I know he's not been in the finest of health recently and looked like he might've been struggling a bit in the furnace.

Seemed like a good percentage of the crowd didn't know the "new" songs, and maybe only a handful of us recognised 'Gift That Shines' or 'Top Nite Out'? Absolutely stoked to hear 'Teachers/On the Wire' - a standout of the night. Great versions of 'Arms' and 'Crash 'n Burn', but I have to say, I do like the unreleased stuff probably a bit more than most of the released material. And WTF is with 'Temple of Love'? It's a muddy mess. Without the vocals you'd hardly know it. It needs to be much sparser and clearer. Compare to 'Something Fast' that was crystal clear, and then to finish with something that is just a sonic puddle isn't working in my book. Fine, if you want to go out on a big finish - do the encore with 'Lucretia' (superb BTW) 'Top Nite Out', then do the singalong-a version of 'This Corrosion'?

The absolute highlights of the night?' Top Nite Out' was the best bit of pure guitar magic of the evening. 'No Time to Cry' - surprisingly, given that it's a long way down my list of fave TSOM singles, but Von actually sang it like he really meant it injecting real personality to the words - almost like a lullaby, like you could whisper it to a child? I didn't mind the flattening out of the gig in the middle with 'Gift that Shines' and 'Teachers/On the Wire', as it meant you could take a breath and lose yourself in those two songs. Dunno if the rest of the crowd thought the same though - it was like 8 minutes of shoe gazing, waiting for something else they could yell along to...

Overall it was everything I'd expected. I guess in my wildest dreams I'd hoped for something truely amazing. Like, fab reworked versions of songs, some old classics and maybe even some 'actual' "new" songs. In truth, I've been browsing Youtube a bit recently and there doesn't seem to be a whole heap of difference from what is aw last night to concerts from 2006? Even setlists seem eerily similar. However, I am absolutely not grumbling - this was my chance to see TSOM live and they did not disappoint. I guess this is what you get nowadays, and there are plenty of us happy with it. I'd say that the girls are easily on a par with anything else that's out there on the festival-rock circuit at the moment. Not sure if I'd pay to see the same show again - if I thought it would just be more of the same - though.

BTW, i did offer my spare tickets to a couple of people in Galbriaths, but no takers - which is a shame as Chris had put me on the guestlist and we got invited to the "after show party", so someone missed out. I guess everyone who wanted to go and got dressed up already had their tickets though. On a side note - when I lived in Bristol in the early 90s there was a pub called the "Bunch of Grapes" that was colloquially known as "The Bunch of Goths" due the clientelle. Good to see Galbriaths transformed in to the Bunch of Goths for the night!
Top

As everyone else said the voice was inaudible for a while. In fact for quite a few songs it sounded like we were listening to Karaoke Sisters of Mercy.

Vision Thing is my least favourite SoM material and unfortunately that metal guitar sounds seems to have been used for all the previous material also.

There were plenty of highlights, pre encore they would be

First and Last and Always
Amphetamine Logic
This Corrosion (!)
No Time To Cry
Alice

All in all good show. But not a great show.
Did they live up to my own hype, probably not. But I am glad I saw them play live. Nice couple of encores.
Top

What kind of an imbecile reviews a Sisters concert and complains about the drum machine and all the smoke?!? Complete ignorance
"We're Hawkwind and this is a song about love."
Top

H. Blackrose wrote:What kind of an imbecile reviews a Sisters concert and complains about the drum machine and all the smoke?!? Complete ignorance

Up to a point. But if a friend dragged me along to a gig that cost that much on the grounds that it was the greatest band ever, then half the band was basically a backing track, the sound was a muddle for the first half and you couldn't see a thing, I might just think of mentioning it.
Top

But it's what you get. They are still a great band, within their own limitations. I don't know of many who would get close to the power and glory of the girls on today's rockfest circuit.
Top

Thanks for the reviews!
"as we walk on the floodland"
Top

But it's what you get. They are still a great band, within their own limitations. I don't know of many who would get close to the power and glory of the girls on today's rockfest circuit.

I'm sure all of us on here (Sultan referred to us as the "Heartland OCD brigade" !) would agree on that. That reviewer was clearly not a diehard fan, but amongst the criticisms he did acknowledge that it was a great gig, despite the limitations (which due to a lack of research he had not expected).
Top

It's always great to see these informal photos of our chairman.
advanced, forthright, signifficant
Top

so back of The Judas of Mercy ?

"judas leaves the sisters" long time ago.
rather "just back from vacation" or "small gap in vacation" style

anyway, he's just a clumsy copycat of my humble person