Does exactly what it says on the tin. Some of the nonsense contained herein may be very loosely related to The Sisters of Mercy, but I wouldn't bet your PayPal account on it. In keeping with the internet's general theme nothing written here should be taken as Gospel: over three quarters of it is utter gibberish, and most of the forum's denizens haven't spoken to another human being face-to-face for decades. Don't worry your pretty little heads about it. Above all else, remember this: You don't have to stay forever. I will understand.
Locked
14 posts • Page 1 of 1

We're back! Normal service is resumed. Transfer windows just about done, internationals done in a couple of hours, still got the same number of Prem teams for now and Robbie Savage is now on the board of resurrected Macclesfield. All exciting! No more free football though. Pah.
GW5's fantastic fixture fixation follows:

Everton 12:30 Liverpool Everton seeing a surge recently, with DCL having a lovely time. Mané should be back. I wouldn't put it past them to give the Reds a scare. I used to be able to see Goodison Park from my bedroom window.
UK - BT Sport
Chelsea 15:00 Southampton Hmm. Just hmmm. It SHOULD be Chelsea to win, which means it won't be.
UK - BT Sport Box Office
Man City 17:30 Arsenal Is KDB out or not? Will Saka begin to shine? Will there be 456457512 goals?
UK - Sky Sports
Newcastle 20:00 Man Utd Pretty equally placed teams, might be bad tempered. Maguire might stay on.
UK - Sky Sports Box Office

West Brom 17:30 Burnley Not paying to see this one.
UK - Sky Sports Box Office
Leeds 20:00 Wolves I should think that this might be a very good gane to watch. Popcorn!
UK - Sky Sports

I see that the PL teams have rejected the latest ideas, with all clubs including the proposers voting against. Won't be the end though, as they've started thinking about the structure of footy.

Wildcard? Tinker? Forget all about it? Whichever it is, get on with it and we'll see you on the other side

BatCave is in Tier 2, which just means look but don't touch. Apologies.
I just can't keep living on dreams no more
Top

Oooh. I'd beter finish up that summary hadn't I?
Cheers.
Steve
Just like the old days
TheCureCommunity

I thought you had!
I just can't keep living on dreams no more
Top

Almost. Just waiting on VAR for the scores

I've been trying to forget about it for two weeks

No way in a million years is this offside. 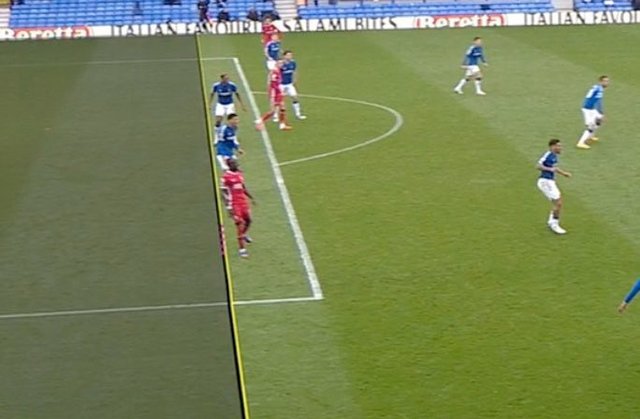 I understand Liverpool want an explanation on that and the Pickford incident.
Not surprised really. Absolutely atrocious officiating.
Cheers.
Steve
Just like the old days
TheCureCommunity

i didn't see it because i was out. what was the Pickford thing?

It's about time that the Blue half of Merseyside had the officials on their side for once.
advanced, forthright, signifficant
Top

Evening all! That was an interesting GW, innit?


Everton 2-2 Liverpool Full of incidents! Richarlison off early, Pickford's appalling challenge on Virgil, an offside that clearly wasn't and shouldn't have even been checked, VAR official saying he didn't see Pickford's as he was looking for earlier offside... Now VVD out for months with ACL and Pickford claiming he didn't mean it really. Not the first time he's done one of those, but no punishment. Mané and Salah doing their biz, Calvert-Lewin having a ball this season.
Chelsea 3-3 Southampton Werner fans delighted with his brace and assist, with other new boy Havertz also on the score sheet. Ings in the swing, and Walcot settling in.
Man City 1-0 Arsenal Lots of saves, several bookings and some misses. Sterling with the goal. Not bad. Good to see Aguero again.
Newcastle 1-4 Man Utd It was 1-1 when I looked then had to go and do summat else. I come back and it's gone crazy! 1 penalty miss, an own goal, saves every few seconds. Maguire redeemed himself a little, the rest of Utd more solid than of late.
Sheffield Utd 1-1 Fulham Points at last! Another missed penalty, by Mitrovic, and another bumper crop of saves.
Crystal Palace 1-1 Brighton Dunk off, Wilf scores
Spurs 3-3 West Ham Son scores after 45 seconds! Kane gets two! They assist each other! Looking good for a bumper score, then they all fall apart with a Sanchez own goal and two lates from WH. Arsewipe. Bale on for the last 20 - looked ok, made a few passes and had a shot. Too many not quite on target... 5 bookings for WH, far too many
Leicester 0-1 Aston Villa Damn Villa and their last minute goal.
West Brom 0-0 Burnley A point for both, at least. Lots of saves, so must have been exciting.
Leeds 0-1 Wolves Both had goals disallowed, but Jiminez scored a good one to win. Not as good as Saiss', though. No thanks for bringing on Neves with tiny minutes left to go so I didn't get Batshuyai's sub points.

A quick peek at the table reveals that IGM are still winning! Yaay! Good work on this GW, kids, leaving us top of the league.

The Yellow Jersey is on Team WMS, congrats!

And the Big Shout Out goes to our (IGM's) very own The Clash Athletic! 90 points, not a bad haul at all.

Over on the H2H, IGM take the glory again - we're milking it just in case it goes wrong

Now bugger off, it's half term